This weekend certainly took an unexpected turn when our ox fell into a ditch - literally!

We have had a steer out to pasture with the intention of butchering him sometime soon, at least before vineyard work begins. As with all overwhelming tasks, however, it was easier to talk about it, plan and put it off. This weekend we were forced to action when he fell into a ditch and broke his pelvis.

The work began when our oldest son called to let us know he had found Hammy (yes, you read it correctly, short for hamburger - his fate was planned when we got him!) in a ditch and was unable to get him out. We quickly went to help dig the cow out and set him free. That was not to happen. John and the boys worked for a couple of hours without success. After consulting our vet, they dug enough dirt away so as to get straps around him and pull him out with a tractor. It was obvious that Hammy must be taken care of quickly.

Several months ago, with butchering him in mind, I had purchased from my affiliate partner, Basic Butchering of Livestock and Game. After all, the only experience I had was dissecting a pig in nursing school and I did not think that would help much!

So, with book in hand, Saturday was filled with skinning and cleaning the almost 1600 lb animal. (We did not weigh him but guesstimated based on Buttercup's weight.) We used a forklift to raise the carcass as it was skinned. Stretched out, it was about 9 ft long.

Once skinned, it was washed and left to hang overnight. This sounds like a few easy steps, but it took all day! Especially removing the internals was a bit scary, but it was a wonderful anatomy lesson for the children - home education is a lifestyle! Thankfully, the weather had once again turned cold and, although it was miserable for us to be out in the cold wind, it was perfect for the meat. 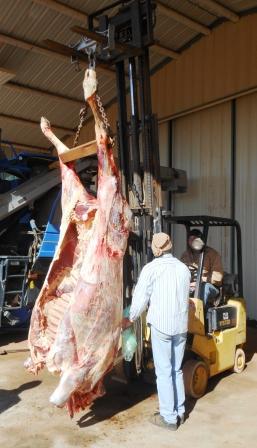 Sunday, again with book in hand, we tackled the job of cutting and wrapping the meat. The most difficult part was determining where to make the cuts. 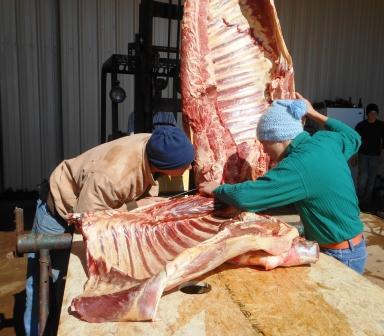 The chart in the book showed very straight cuts which did not follow muscle groups. After varying amounts of discussion, decisions were made and the meat cut.

Once the pieces were cut, others wrapped the meat in plastic wrap and then butcher paper for added protection and finally the packages were labelled. Butchering definitely involved everyone! 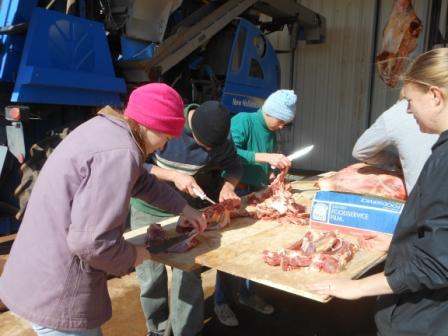 We ended up with about 570 lbs of meat, mostly roasts but also plenty of ground beef and soup bones! For a 1600 lb steer this may not seem to be much meat but he was a Holstein. Holsteins are bred for dairy purposes and not meat production. As a result, his frame was large and not as much meat, as say, an Angus. That being said, we only paid $10 for him at a local dairy when he was a few days old. So, except for the initial $10, Buttercup's milk when he was young and pasture grass, we had very little invested!  It is so exciting to have such economical, good quality, grass-fed beef now in our freezer.

It is also a huge relief that it is over and everyone is safe. Plus, we had a lot of fun working together - What a sense of accomplishment! 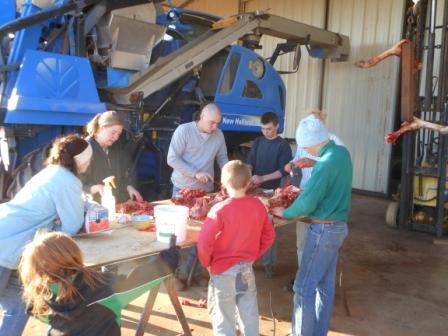