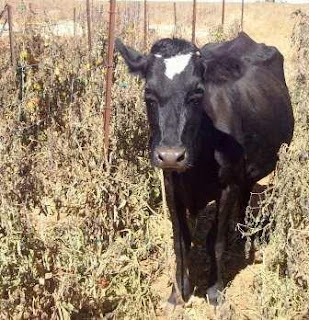 Is that Buttercup (our family milk cow) eating what is left of my tomatoes?  LET HER HAVE THEM!

Does she look a little sad? Only because she loves the ripe tomatoes and has nearly stripped the vines of them now. (We had 168 tomato plants in our garden.) As you can see from the picture, she has left the green ones and has not even touched the actual vines yet.

We had a freeze last week and the tomatoes that were left do not have much flavor. Believe me, my husband kept trying them since they looked ripe and tasty. But, even he admitted they are not good anymore. That settled it - Buttercup gets them! 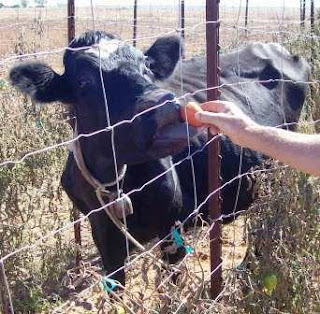 We figure that after she cleans off every last red tomato, she'll mooove on to the green ones. Mooing is what she does when my husband lets her in them each morning. As they cross the lawn she remembers what's ahead and starts galloping! My husband has to run with her to keep up! He leads her with a halter but sometimes it is difficult to tell who is leading who!

When you think table scraps, do you normally think of a feeding them to a cow? I would think of a dog or a pig first! But, Buttercup loves leftover food from the table! While we do not normally have much food that is leftover from a family our size, when we do it gets divided between the dogs and Buttercup.

Do you know the one thing that we have found that she will not eat (and about the only thing)? Tumbleweed. Imagine, her not liking tumbleweed. After all, it is so dry, prickly and delectable! Actually, tumbleweed is also called Russian Thistle and was originally imported to the Dakota's as an alternative cattle feed!