As you can see, the grapes in the vineyard are getting larger compared to the pictures taken a little over a month ago. It is exciting, to say the least, as we watch the progression. 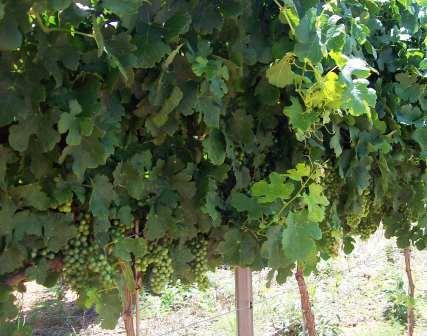 The second wires have been raise so the vines appear very flat on the sides. They are being held up by the wires for support.

With all the rain we have had, it has been necessary to spray the vineyard with a combination of chemicals for powdery mildew, bunch rot and phomopsis. These can not only effect the health of the vines but the quality of the grapes as well. 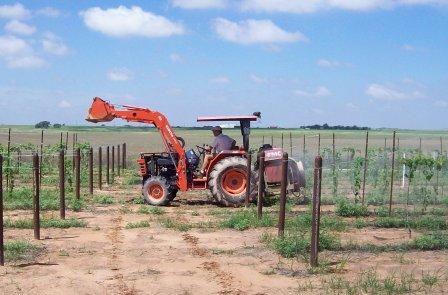 It is difficult, as we see the vines loaded with fruit, not to "count our grapes before they are harvested'! We had a stark reminder that it is indeed, not a done deal. A neighboring farmer sprayed his crop with a herbicide which drifted and was smelled at the vineyard while it was being sprayed.  A couple of days later, we noticed black spots on the grape leaves. At the same time, his crop was wilting and turning brown. All I could think was "the Lord gives and Lord takes away, blessed be the name of the Lord." John called the farmer to find out what was sprayed - if it had been Roundup, we would need to drop all the fruit in an attempt to save the vines. As it turned out, it was not Roundup but rather was a herbicide which was suppose to be safe for his crop as well as grapes. He is aware the vineyard is there and tries to be careful with what he applies and when. Thankfully, no further damage is seen on the grapes, there are no spots on the new growth and the neighbor's crop has also recovered.