Garden produce from a late garden suits me just fine!

Many people have been harvesting from their gardens for a while now, ours is just beginning. Yes, I have missed fresh squash, tomatoes, beans and ...  But, with all the vineyard work, I am thankful to have a "late" garden!

We have harvested enough zucchini and yellow squash for vegetable enchiladas - Mmmm! The beans and peas are just about ready to pick. We have bell peppers that I used in scrambled eggs yesterday. The tomatoes, well, they are growing and in addition to a couple of tiny tomatoes, have quite a lot of blooms. We put up a trellis fence for the tomatoes and as they grow we will tape them (with the vineyard tapers) to the fence. There is just nothing like fresh garden produce!

I fertilized yesterday and thankfully we got a rain shower last night! John used seven dust on the corn which is just beginning to tassel. Have you ever shucked wormy corn? If so, you will appreciate the value of seven dust.

Since I desire every area of our lives to feel and look homey, I even decorated the garden. Look closely and you can see my pink flamingos - I think every garden should have at least two! I must confess, I had been coveting them at a local store. Since finances were tight, I did not think it prudent to spend money on them. Besides, how would I explain their appearance? I did not think anyone here would buy the lie that they flew in - they are pretty smart and everyone knows that pink flamingos don't normally fly through the west Texas area!

Do you know where pink flamingos live? Well, I did not so I had to look them up on Wikipedia. The four American flamingo species live in the Caribbean, South America and the Galapagos islands (off the west coast of South America). Other species live in Asia, India, S. Europe. But, my pair is an American variety made of plastic. A sister-in-law saved me from my coveting- she visited and as her gift, she brought a pair. Thank you, Joan! 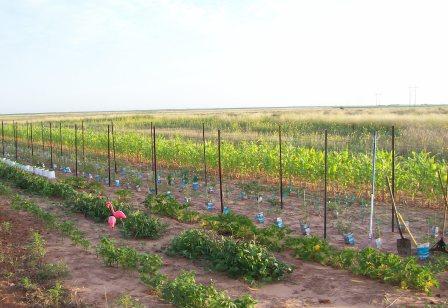