You know the saying, "All work and no play makes Jack (in this case, John) a dull boy."

Well, I can't have that! So, below is the picture of a very happy man. Why? - you might wonder. Not only is he making his own beer, but he is making it using the rye that we grew and had a neighbor harvest! In "Harvesting Rye" I posted pictures and gave details of the planting and harvesting.

He has just made homemade beer even more economical - that is why he is so smiley! (He calculates it to cost less than $14 for the ingredients needed for a 10 gal. batch. Add < $1 for cleaning, propane and water and it is still less than 15 ¢/ 12 oz bottle - his time is free.) 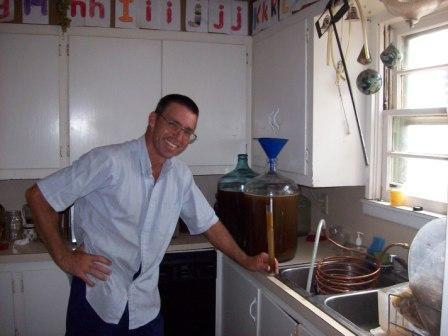 Their are several ways to make your own beer. The easiest is to start by peeling the label off a bottle from the store and call it your own, and it would be, unless you stole it!

Otherwise, you can get a kit online or at a local beer/wine making shop. These kits can be simply just mixing and bottling or actually cooking some of ingredients.

John's favorite way now is to start with the malt and grain. Sometimes he roasts the barley malt (to enhance the caramel flavor) and then grinds it by hand (with the help of the younger fellows).

The malt is slowly cooked (mashed) to convert the insoluble starch to sugars. The liquid is filtered off and then sanitized by boiling (this also cooks off some bad flavors).

The cooled liquid, now called wort, is transferred to glass carboys (on the counter with the blue funnel) where yeast is added. (Up to here usually only takes him ½ a day.) The yeast will ferment some of the sugar to alcohol over the next few weeks.

Finally, the green beer (translate "young" - it is not literally green!) is decanted from the yeast cake and bottled with a little more corn sugar added to generate carbonation in the bottle. (The proceeding explanation was written by my ghost writer, former chemist husband.)

I did not acquire the taste for beer until we lived in Germany. "Das Schwartze" was a dark German beer that appealed to me.

John was not making beer at that time and it was not until we moved back to Alabama that he began. He has made some very good ones.

My personal favorite is a type of Belgian Wheat which has orange peel and coriander in it.

It is always a waiting game to see how it tastes once bottled and allowed to sit for the carbonation to develop.

« Tiring to Say the Least!
A Late Garden Works for Us! »