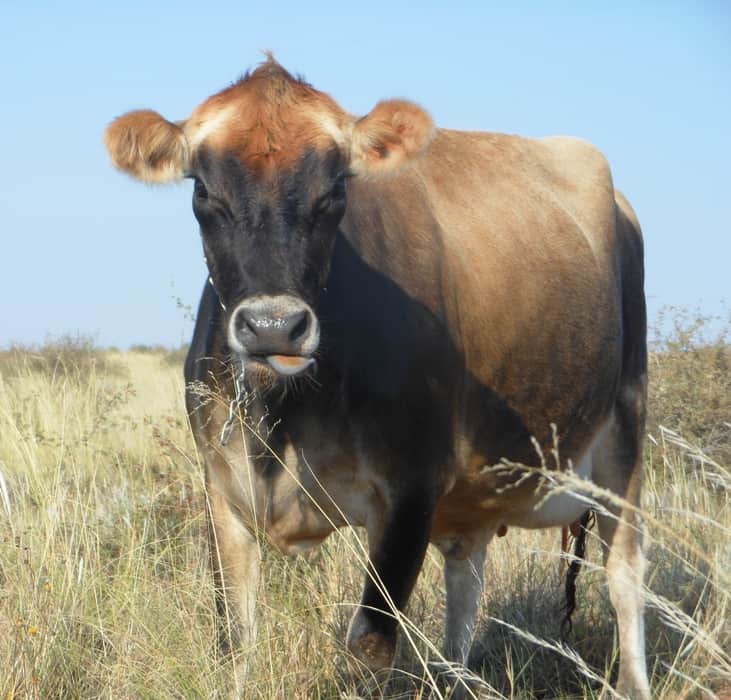 Sunday is the day for our cows to calve! If you remember, Buttercup had LBC on Sunday while we were at church. Yesterday, after returning home from church, Emme, who was due last week, was standing and acting differently.

Normally, if she even thinks we are going to give her a treat, she comes bounding like a 700lb puppy! It can be quite scary when she is running straight at you - you wonder if she will put the brakes on in time! But, not yesterday. She was hiding well away from the house behind brush in the pasture.

Needless to say, every 30 minutes or so, someone went to check for a calf. Finally, on one look-see, I saw two little hooves coming out! Of course, everyone was called for the joyful event. Once everyone was quietly watching, everything stopped!

Putting myself in Emme's hooves, I probably would have been too nervous to deliver with fourteen people watching - no matter how quiet they were!

Our concern was that this being her first calf, and she, being the petite little thing that she is - at least beside Buttercup who is ¾ Jersey and ¼ Holstein - would not be able to deliver. So, I called the vet who advised palpating to make sure the head was between the showing hooves. If the head was between the hooves, the calf could then be "pulled" during a contraction to help it's entrance into the world. I am sorry to say, with all the excitement, I had no time to take pictures.

But, here are some pictures right after birth. As you can see, Brie is solid black with a spot of white on her head. Emme being a natural mother, began licking and cleaning Brie immediately. 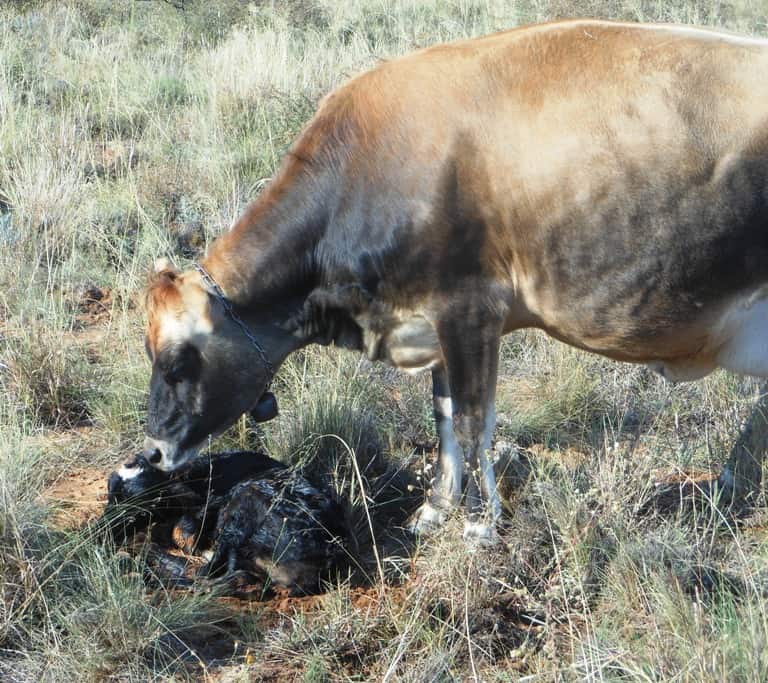 Since mommy and baby were doing fine, we left them alone until milking time which is 6pm. When we returned, it was obvious that Brie had learned quickly how to nurse. 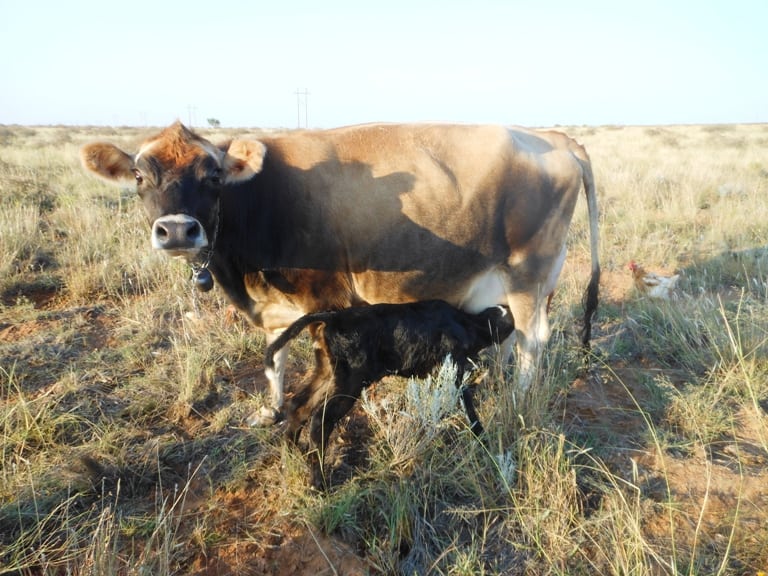 After milking Buttercup, it was Emme's turn. Still out in the pasture with Brie, she had to be coaxed to the milking parlor. Brie was carried ahead of her and she willingly followed - just like on "All Creatures Great and Small"! 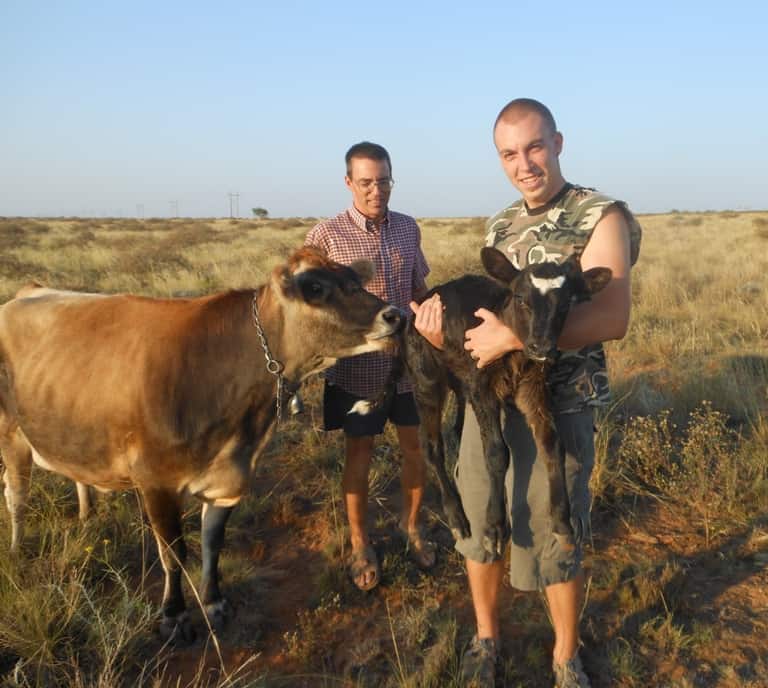 Buttercup, who by the way seems a bit jealous and pouty, was not going to be left out and brings up the rear of the parade. 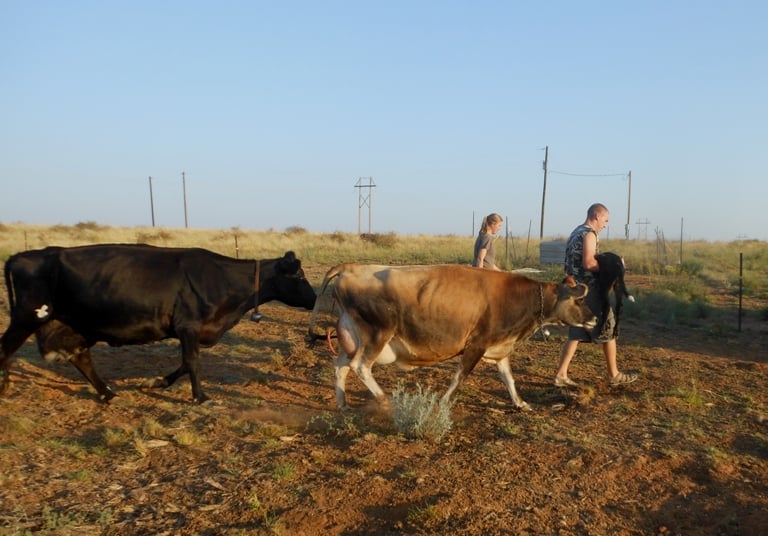 Emme was a trooper. Despite having a very swollen bag, she never kicked! This may not seem like a big deal, but if you have ever milked a cow, you know how close you must get to those deadly back hooves! Despite any discomfort, I think she rather enjoyed the attention - soft talking, brushing, petting and grain!

While Emme was being milked, Brie stayed by her head and the barrel which holds the grain for the cow being milked. She was just content to be by mommy! 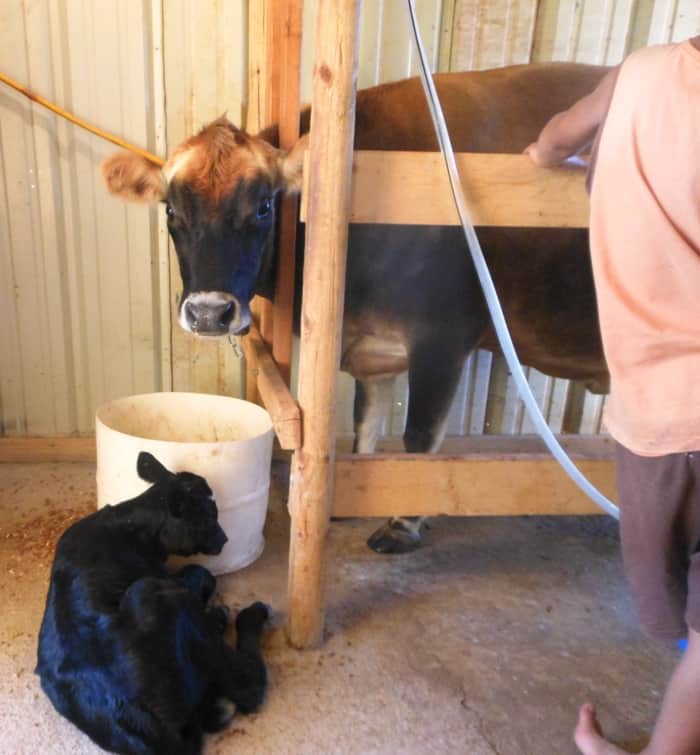