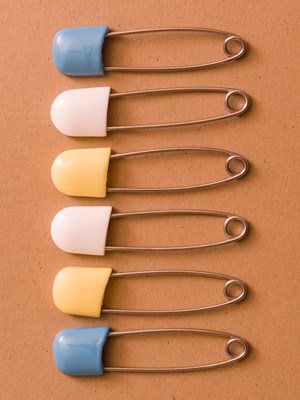 This would be a milestone for anyone, but for us, it is the end of an era. An era spanning 26 ½ years.

Our oldest son was born ten days before our first anniversary. Little did we know that our first year would be one of the few periods of time in our married lives without diapers.

Diaper bags took the place of purses. Why carry both? It was much easier to throw my wallet and lipstick in the diaper bag. I think I have gone through at least 8 - 10 diaper bags. They were stylish, of course, and though they did not define me, they became my main fashion accessory. I like big purses so my diaper bags were also big. Maybe I should say, they were mutli-functional bags.

Having used cloth diapers for the past 26 ½years (except occasionally splurging on disposables) I have seen the decline in diaper quality over the years. I am not talking about those cute ones available now with covers that use snaps rather than diaper pins. Being a hard core cloth diaper mommy, I stuck with diaper pins and plastic pants. Plastic pants which, by the way, as the quality decreased over the years, your fingers could go through if you were in a hurry and pulled them up on your toddler too quickly! My reasoning for not investing in the latest cloth diaper craze was, of course, financial. While still less expensive than disposables, they were much more costly than if I just stuck with what I had. After all, how many more children would I have?

So, here we are, twenty-seven, almost twenty-eight years from when we started. I am finally trading diapers for big girl panties for the last time and a diaper bag for a purse.

Think you detect a bit of sadness?

I do like purses - big metallic ones and big ones in pop colors - that's undeniable.

I guess I just have to face it - the end of an era has come!

Maybe the girls will let me carry the grandchildren's diaper bags.

Maybe, I should go shopping for a new purse!