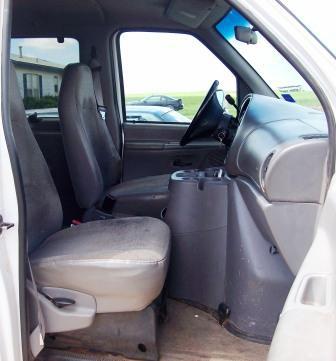 This is a picture of the front seats in our 15 passenger van. They look harmless don't they? Well, on Friday and Saturday they did not smell harmless!

It all started on the way to Chick-fil-A's Cow Appreciation Day. When the van door was first opened, there was a slight smell which we thought was due to all the rain and wet weather we have been having. On the way to Lubbock, the smell worsened, but, only for those sitting in the front. Those fortunate enough to be in the rear seats did not smell anything. By the time Chick-fil-A was reached, the smell had turned into a stench! And, the van had to be used for the return trip home. By now, the smell was narrowed down to be coming from the front passengers seat and we were sure something (a mouse or a rat) had died. Examination by flashlight, under and around the seat, revealed nothing.

On Saturday morning, John had the very unpleasant job of taking the seat out of the van and removing the seat cover. Sure enough, a mouse had crawled up into the seat and died! After a thorough cleaning and a bleach job the smell was gone - almost anyway. It still took a couple of more days before the van the was completely odor free.

I wonder, do other people have things like this happen or is it only to us?

« Most of My Herd!
Harvesting Rye »