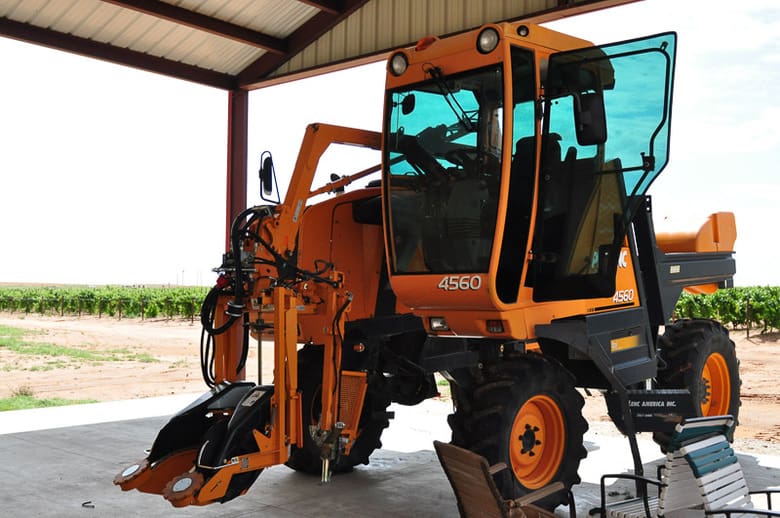 If you remember, a couple of years ago we bought a Pellenc 4560 multi-function vineyard machine (i.e. grape harvester) which you can see in action here in this harvest video. Not only can the Pellenc harvest grapes, but with other vineyard attachments, it can be used as a pre-pruner and now, the Pellenc Wire Raiser.

To manage the canopy (shoots and foliage) of the grapes, we use a Vertical Shoot Positioning (VSP) trellis system. Ideally, the shoots of the grapevines should grow upward exposing as many leaves as possible to the sunshine. A horizontal wire, running 3-4 feet off the ground, is called the cordon wire. This wire supports the main arms of the vine and from these arms the shoots grow upward. Two additional wires on both sides of the vine foliage, at 4 ft and 6 ft. from the ground, are used to hold the shoots as vertical as possible, hence, VSP.

So, once the shoots are raised with the VSP wires, the shoot's tendrils attach to the wires and other shoots for further support. Manually raising the two sets of wires constitutes the majority of our summer work. Not only does wire raising take time, the second wire is physically demanding - by July when we need to lift the second wire, the canopy is extremely heavy!

The last two years, we tried leaving the VSP wires in the "up" position and arranging the shoots between them as they grew. This was satisfactory in our ability to manage the canopy, but it ended up requiring even more time.

So, needless to say, everyone was thrilled when our new toy - the Pellenc Wire Raiser - was delivered. The wire raiser was suppose to be delivered in May, but its trip from France wasn't complete until the middle of June. All the while the vines were growing and the shoots getting longer.

A couple of days after returning from our "Maine" trip, the wire lifter was delivered. Before the delivery truck was off our land, we commenced to doing the final assembly and checking it out. Regrettably, two days were lost due to a malfunctioning solenoid valve and the mis-positioning of a bracket at the factory. But then all corrected, we were ready to go..... 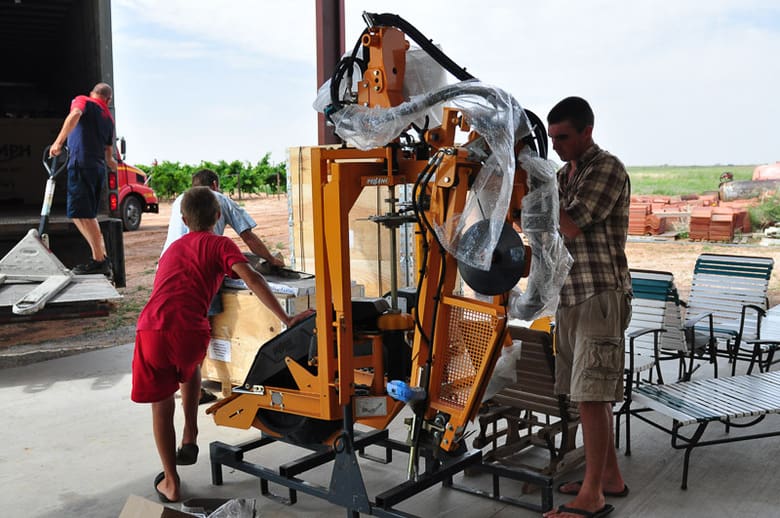 The Pellenc machine with the wire lifter rides on top of the grape rows (like the harvester and pre-pruner). 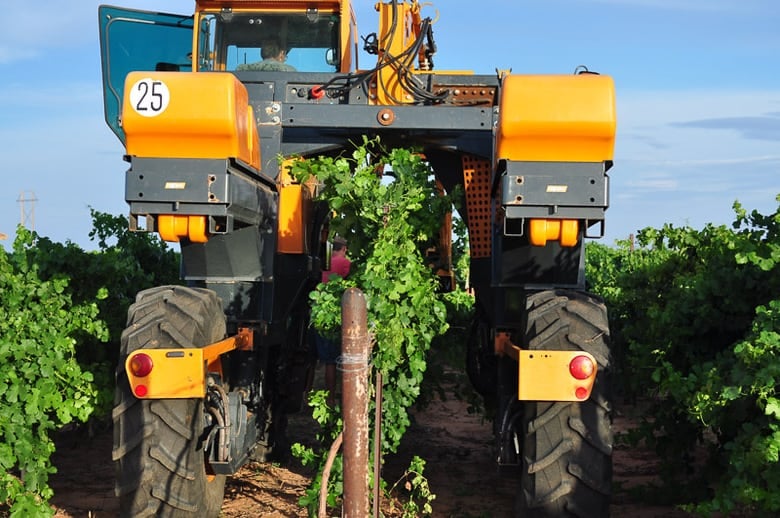 Below, the vine shoots are being lifted in front of the machine as it lifts the wire to the desired height (seen in the middle right of the picture) and stands up the shoots by the rotating black wheel (bottom half seen in the middle). Plastic clips are periodically snapped on to the two wires (one on each side) to keep it all together using the stapler mechanism (above and in front of the wire on the right). 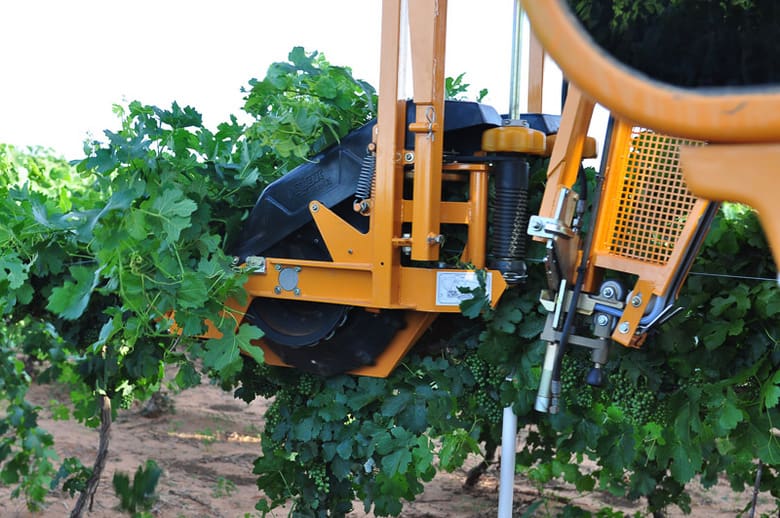 Below you can see a row of Roussanne before the first set of wires are raised. As you can see, it is wild and uncontrolled. As the vines sprawl to the ground bug pressure increases - bugs from the ground have more ready access to the vines and the grapes are not exposed to the sunlight - they need the sunlight to help develop the best flavors. 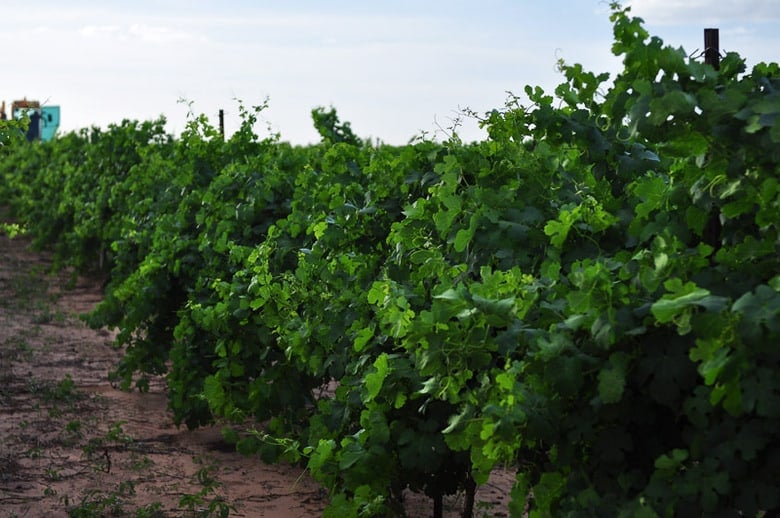 Now, look at the same row after the wire raiser has raised the wires - what a difference! 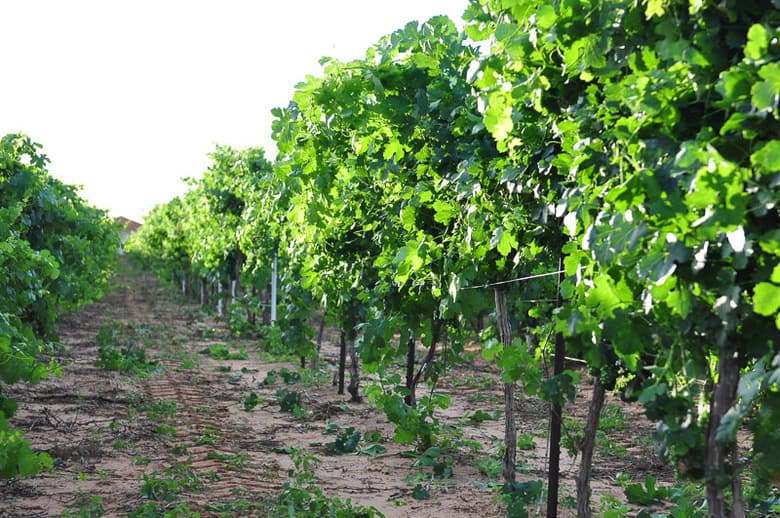 This was great for the Roussanne and Aglianico whose shoots were averaging only 2-3 ft. The Montepulciano was acceptable but not nearly as pretty because its shoots were already averaging 3-4 ft. All in all, we are very pleased with this new toy!