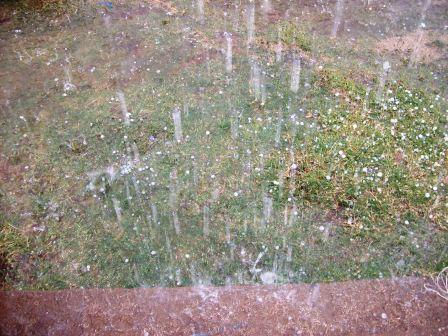 Finally back to the land of the living! Our internet was knocked out by the thunderstorms which included rain, thunder, lightening and hail. This year we have had 36 inches of rain! That is three times the normal yearly rainfall! Four and a half inches fell in one night. Now, this would not be a big deal in lower Alabama, but here in west Texas, it is a major problem. Streets were flooded and just plain messy. Many crops have been hurt or destroyed.

Most of the chickens were huddled together in the cow palace. But, one, it seemed, needed some time out with its beak to the fence! I think a better time could have been picked. She must have decided so also, because not long after this picture was taken, she too ran for the safety of the cow palace. 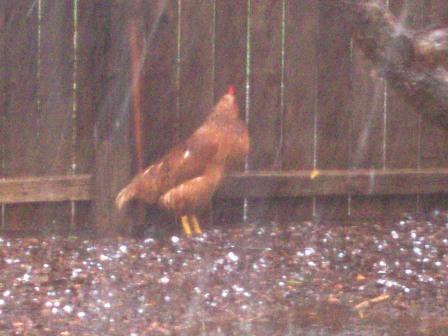 The hail was the worst. Had it happened a couple of weeks earlier, we probably would have lost our grapes. By the time the storm was over, the ground was almost covered with pieces of hail ranging in size from ½ inch to ¾ inch in diameter.

The saddest thing, though, was the next day driving around while on an errand. The farmers around us had dug peanuts the week before and they were laying on top of the ground drying. Now, being so wet, the peanuts must dry quick enough so as not to rot and be a total loss.

The cotton was much the same story. If it had already been sprayed with a defoliant, much of the cotton bolls were lost in the hail. If it had not been sprayed, some of the cotton had weeped out of the boll, had mud splashed up on it, or had the possibility of being stained by the plant itself from all the water. Any of these sceneries bring a considerably lower prices to the farmer.

While we only lost about ⅓ of the foliage from the vines, others lost so much more. It is a stark reminder of how truly temporal this world and the things in it are if we set our hopes upon it.

« The Beauty of the Rainbow
Mouse Trap = Victory! »