John climbed on top of our filter station barn to take the following pictures. The filter station building protects the pressure gauges and exposed pipes for our in-ground, drip irrigation system from the wind and weather.

Here is the 2009 planting of Roussanne. As mentioned "Pruning and Training in the Vineyard", we did not train these vines at all last year. The plants were delayed in their growth because of warm weather in January and February which cause the vines to bud prematurely. This was followed by freezes which killed the primary and secondary buds. Because the vines expended so much energy to produce a third or tertiary bud, the growth was delayed. 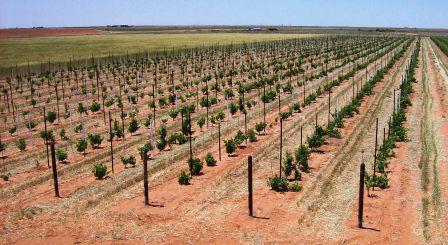 We are just beginning to select one of the shoots from each plant, tape it to the bamboo which is for vertical support until the vine reaches the horizontal cordon wire. Once the best shoot is selected, the remainder of the shoots are then cut off so all the plant's energy can go to the main stem.

Here you can see the 2008 Aglianico which produced a small harvest last year. We are periodically walking through and taping the new growth to the cordon wire. It is loaded with fruit and, Lord willing, will produce a good harvest in the fall.

Thankfully, everything is growing with gusto this year! In fact, we are hustling just to keep up with all the work!