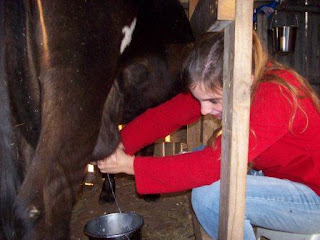 Gone are the days of milking by hand - hopefully forever. Although when we first got Buttercup, it was exciting and pioneering to milk by hand. Everybody did it - even down to our 3 yr old! Some were much faster, while others claimed their hands were too big - Yeah! Anyway, usually two people milked her (my daughters, daughter-in-law and I), for safety and to have a fresh set of hands to finish her off. But after she calved in June (her 3rd, but our 1st), she topped out  at 8 gal. a day. That was 4 gal. per milking, each taking 40 min. which, needless to say, for us was tiring. 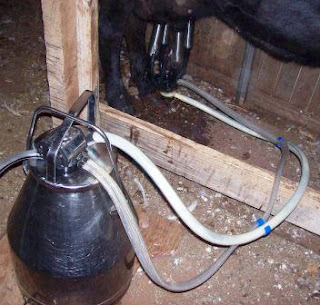 So when we had the chance to switch to a milking machine, everyone wanted to take it. The "machine" actually consists of the "claw" (four pulsating suction cups), the 8 gal., vacuum rated, stainless steel milk can, connecting hoses and an electric vacuum pump (not shown). Sanitizing the milking machine does not take much more time than the 2 gal. pails we were using. And, cleaning Buttercup's udder is no differnent either (water, a few drops of liquid soap and white vinegar). But now the actual milking process takes less than 10 min.! When we are done, the milk is poured into sterilized ½ gallon jars. Previously we filtered the milk as we transferred from the open pails to the jars. If there were any flies, straw or hair, they were removed by filtering. If we saw other undesirable matter, we ended up tossing out that pail's contents = dog food. Even at that, we occasionally had some milk spoil = more dog food. But now, with the closed milking machine in use since July, we have not had any milk spoil  - even when some got left in the frig for over 3 wks!

I love the age of technology!